” in class 04 under registration number 504089 for goods such as oil lubricants for motorcycles. The Applicant is related to the TOP 1 Oil Products Company that was founded in 1979 in the United States of America by William A. Ryan, with the purpose of providing quality car care lubricants to consumers worldwide.

PT Lumasindo Perkasa, is a well known local lubricant company in Indonesia. On the 10 March 1998, the mark “

” applied for by PT. Lumasindo Perkasa was allowed registration in the Indonesian Registry under registration number 411000 in Class 4 for the following goods: Oil, Grease for Industrial use, Lubricant, Absorbent substance composition.

Prima facie, the marks owned by the Plaintiff and the Defendant are significantly different, and there are no obvious similarities between the said marks. However, the Defendant had produced and sold their products that copied the overall look and feel of the Plaintiff’s mark, as set out below:

Therefore, the use of similar mark on its packaging will affect the entire appearance of both marks’ packaging, as shown below: 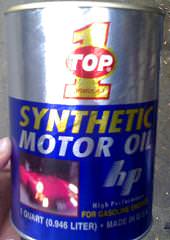 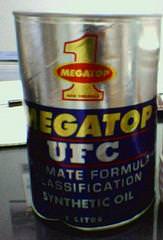 Lawsuit in The Commercial Court

The Plaintiff filed a lawsuit against Defendant at the Indonesia Commercial Court on the 3 January 2003, on the basis of article 61 Paragraph 2 letter b of Trademark Law No. 2001 which is set out below:

Deletion or Cancellation of a Mark: Article 61(2)(b)

The Plaintiff claimed that:

1. The Defendant’s use of the other mark elements together with the registered word mark MEGATOP, i.e. the word MEGATOP in yellow color on red ellipse with the numeral logo 1 in yellow color thereunder, to be used in market, was contradictory to the aforementioned provision of trademark law in Indonesia.

2. Due to the similarities in packaging, the general public will assume and be mislead into believing that the mark MEGATOP is related to the Plaintiff’s.

3. The Defendant’s sought to take advantage of the goodwill and well known status of the Plaintiff’s mark

4. The Defendant’s actions would cause damage to the good reputation the Plaintiff has building in the market

On 29 January 2003, the Defendants filed a response against the lawsuit to the Commercial Court to defend their mark. In their objection they claimed that:

1. They had indeed used the relevant mark for their product sold in market with the one registered in registry without adding or reducing the word mark MEGA TOP.

3. The Plaintiff has tried to confuse the concept of trademarks with that of a product’s packaging, and the Defendant contended that the Court in reviewing the use of a mark in a product must differentiate between the actual mark, and elements of packaging and logo design.

The Plaintiff upon rejection by the Commercial Court, then filed cassation to the Supreme Court of Indonesia.

In the Supreme Court Judgment No. 016 K/N/HaKI/2003, issued on 1 September 2003, the Plaintiff’s claims on the cassation were partially approved.

The Supreme Court ruled that:

1. The Defendant’s previous argument on filing its mark

2. The Supreme Court went on to decide that the use of the mark MEGATOP by the Defendant was irrelevant to its registered form, and therefore cancelled and removed the registered mark “MEGATOP” from the Trademark General Gazette.

3. The Supreme Court also ordered the Defendant’s to pay the Plaintiffs for their legal costs.

The Defendant then filed a re-consideration request to The Supreme Court on the following grounds:

That the Supreme Court had given a wrong decision due to a lack of legal consideration, as well as irrelevant legal consideration, as the Defendant submitted that the basic law to be used in this case was that of the Law of Copyright, and not Trademark law. The defendant further submitted that the Supreme Court had exceeded its authority.

After considering the reconsideration request, the Supreme Court decided to refuse the request as it opined that the proper law to be applied is that of Trademark Law, and not the law of Copyright as asserted by the Defendants. The judgment of the Supreme Court was handed down on the 6 January 2004.