PT Gudang Garam Tbk is a leading manufacturer of Indonesian kretek (clove cigarettes) and other tobacco products. Gudang garam means “salt warehouse.” The design of the company’s cigarette pack was conceptualized by its owner, Surya Winowidjojo, in 1956. By the end of 1958, the business had 500 employees producing 50 million kretek annually. Today, Gudang Garam is listed in the Jakarta and Surabaya Stock Exchanges. It has at least 79 trademark registrations for Gudang Garam and its variants in Indonesia, mainly in Class 34, covering the following goods: “kreteks cigarettes, cigarettes, white cigarettes, cigars, tobacco, ashtrays, cigarette holders, matches, lighters and kind of goods, tobacco sauce.” 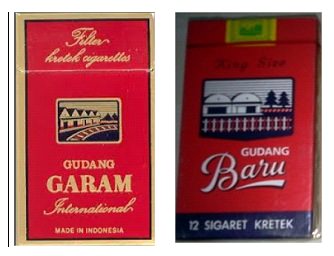 The earliest registration was secured on July 16, 1980, under registration no. 147543 in Class 34 covering kretek cigarettes.

Gudang Garam instituted a cancellation action before the Commercial Court of Surabaya, seeking cancellation of Khosin’s registrations in the name of Khosin based on the following:

The Commercial Court found that Gudang Garam’s trademarks were well known in Indonesia. It also found that the contending marks were similar and that Khosin registered the marks in bad faith.

Khosin filed an appeal before the Supreme Court. The Supreme Court reversed the decision of the Commercial Court and held that the contending marks were dissimilar and that there was no likelihood of confusion (162 K/Pdt.Sus-HKI/2014, April 22, 2014). Firstly, it was noted that there was insufficient evidence to support a claim of bad faith. Secondly, the Supreme Court found that the contending marks were similar only with respect to the term “Gudang,” which means “warehouse,” and the term “Gudang,” which, per se, does not possess any distinctive character. As a whole, the marks possessed different shapes, styles and sounds. Hence, the possibility of confusion was remote, said the Court.

This case illustrates that similarity in one component of a mark does not automatically result in a “confusing similarity” between the contending marks.