Ferrero S.p.A. (the applicant) applied to register a 3D mark in Class 30 (under International Registration number 1199758) in Singapore (Trade Mark No. T1406403E) (application mark). The mark was described as “a coordinated packaging design, consisting of a crinkled gold foil spherical wrapping, in a brown pleated designed cup-holder with two gold lines. The combination is topped off with a white oval sticker, also designed with a gold rim with a black [sic: blank] white space,” as follows: 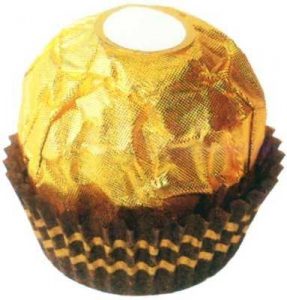 An ex-parte hearing was requested after a final refusal was issued for the following reasons: (1) lack of inherent distinctiveness to qualify for a registration under Section 7(1)(b) of the Trademarks Act (TMA), and (2) insufficiency of evidence of use to overcome this objection. The intellectual property adjudicator’s full decision was released on December 10, 2019.

At the outset, the adjudicator was not convinced that the application mark met the definition of a trademark as set out in Section 2(1) of the TMA, and indicated it should have been rejected under Section 7(1)(a) of the TMA before considering Section 7(1)(b).

The adjudicator opined that the application mark was better characterized as a composite mark of a design comprising 3D shapes, aspects of packaging, and color. He indicated that none of the elements present in the application mark added to its distinctiveness and the average consumer would view them as merely functional or decorative elements. Accordingly, the objection under this section was maintained.

The adjudicator was not swayed by the applicant’s evidence of use, including sales and advertising figures, promotional materials, and a market survey report. He concluded that the FERRERO ROCHER mark featured prominently in the sales and promotional materials, and he disregarded the market survey report as it lacked clarity as to how the survey was conducted.

He stated that registration of packaging as a trademark was not a given with extensive promotion, advertising, and sales under a distinctive mark. Rather, it should stand on its own and function as an identifier of trade origin.

He further observed that registered trademarks are valuable property rights, but could be obstacles to legitimate competition if granted freely. The TMA, in particular provisions under Section 7, provided the requisite balance.

Consequently, the applicant’s reliance on this section was rejected by the adjudicator and registration of the mark was refused.

A version of this article first appeared in the INTA Bulletin Vol. 75, No. 6. For more information, please visit http://www.inta.org/INTABulletin/Pages/INTABulletin.aspx