The terms chocolate and malt drink immediately conjure up images of Nestlé’s popular beverage Milo. The drink has been so popular that the company often projects very large market share figures. Although the beverage itself and the term Milo have been used for over half a century, the evolution of the brand and the logo witnessed the addition of the device seen opposite, a geometric shape that framed the word Milo. In this case, Nestlé successfully registered the marks Milo and the Thai equivalent. However, the company faced an uphill battle to register the logo. 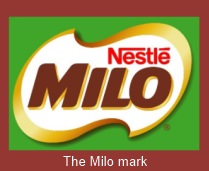 The Registrar of Trademarks refused to register the device mark on the ground that it lacked distinctiveness. The Trademarks Board refused to overturn the Registrar’s decision. Aggrieved, Nestlé filed an appeal to the Central Intellectual Property and International Trade Court, which reversed the decision of the Tribunal and allowed registration. The Department of Intellectual Property then appealed to the Intellectual Property and International Trademark Division of the Supreme Court, arguing that the device mark was nothing but an altered geometrical shape, thereby not being an artificial image and hence not distinctive. Nestlé countered, by relying on use prior to the date of filing the application for registration.

The Supreme Court opined that the device mark was an “artificial image” and hence constituted a mark under the Trademarks Act. Further, it could also be construed to be a trade mark, when used in connection with the goods in question. However, it was held that the characteristics of the device mark, which are meant to differentiate it from a regular rhombus, are so insignificant that the public would not notice the difference between the two. Thus, by virtue of the device mark not being unique, the consumers would not be able to identify any differences between Nestlé’s product and those of a competitor, unless the words Milo or Nestlé were inscribed within the device mark. The court further held that the mark had not acquired distinctiveness by use.