Advertising agencies that make imitation or adaptation of work of others are producing what is illegal, therefore immoral and unethical.

In a recent case, Dentsu Utama, a Malaysian advertising agency, was accused of plagiarizing the artwork of British designer, Tom Anders. The ad agency however, has vehemently defended these accusations. The artwork by Dentsu Utama was for a World Wildlife Foundation (WWF) advertisement campaign which went on to win a prestigious award for advertising.

The respective artworks are shown in the diagram below. 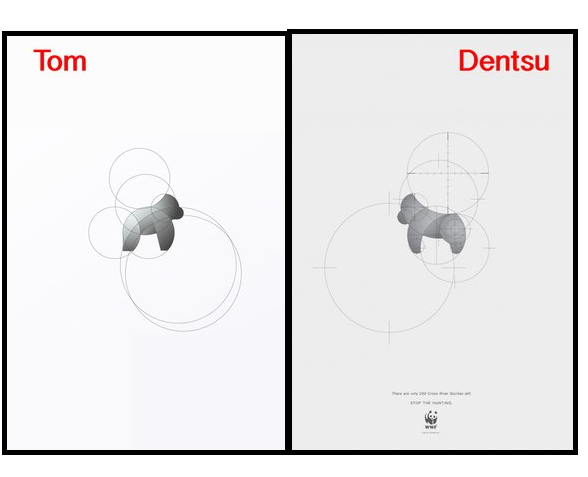 Tom claimed copyright infringement. Tom claims that Dentsu Utama copied his artwork, and the level of copying was considered to be misappropriation.

Using a lay comparison, both the artwork shows that Tom’s gorilla is remarkably similar to Dentsu Utama’s. Both parties’ artwork makes use of circles; however, Dentsu Utama may have adapted the circles to give the impression of dissimilarity.

Dentsu Utama insists that the work is original and any similarity was coincidence. This defense appears weak as the advertisement agency has a history of producing artwork similar to others. In another cases, the Malaysian Association of Accredited Advertising Agents (4As) decided that the ‘Professional Man’ (above) was similar to the work of Swedish artist Erik Johansson’s entitled The Architect.

The Association of Accredited Advertising Agents (4As) (organizers of the Kancil Awards) have disqualified Dentsu’s work and revoked the Kancil awarded to Dentsu Utama. In response to the decision by the 4As, Dentsu Utama has quit the 4As on the 8th of January 2016.

The Malaysian Intellectual Property Office (MyIPO) has recently introduced a voluntary notification system. It is highly advisable to make use of it as an added form of copyright protection for makers of any copyrightable work.

This article was first published in Volume 11, Issue 1 of the GALA Gazette. For more information, please visit http://galalaw.com.